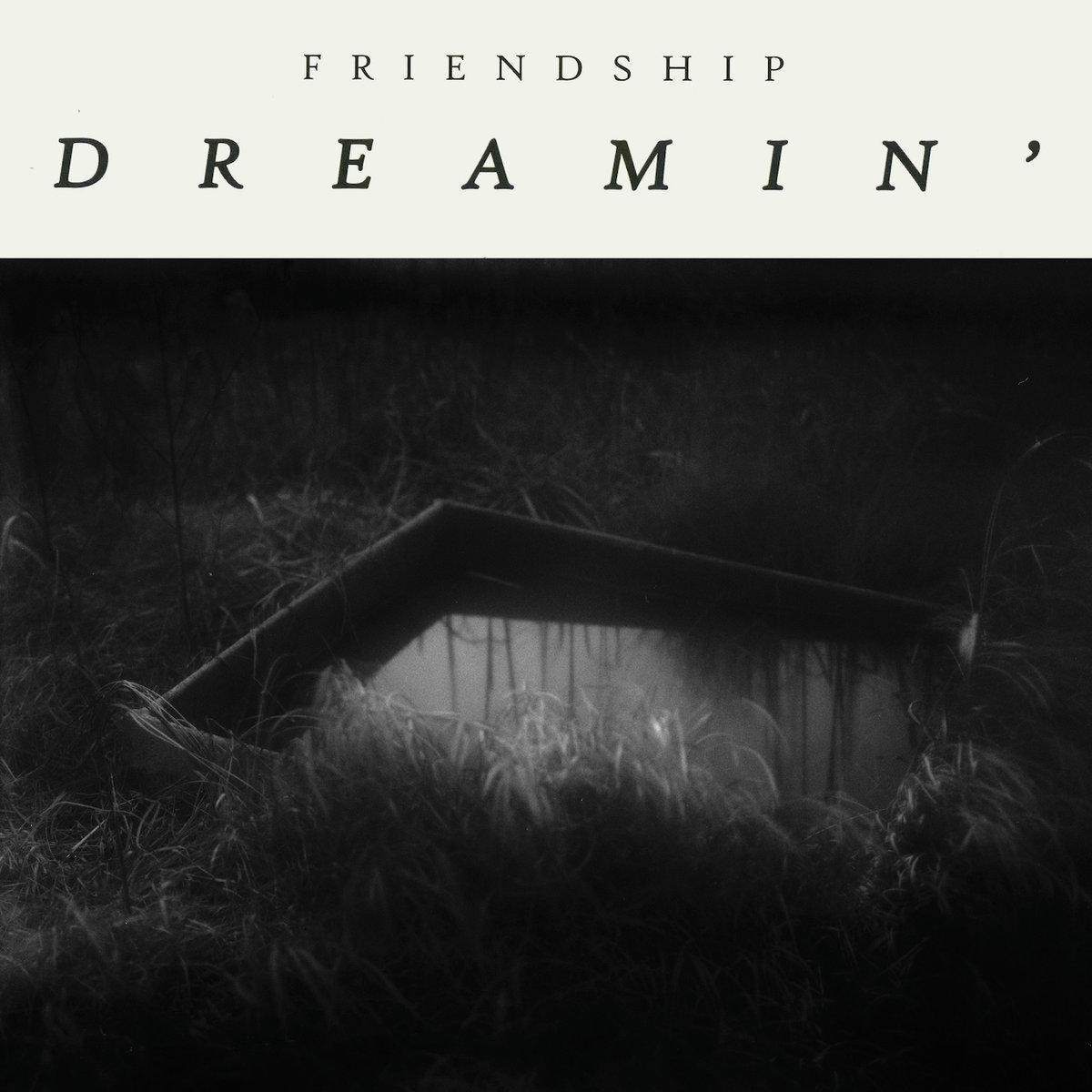 “I don’t know why we denigrate country music,” says documentary filmmaker Ken Burns in an interview with NPR about his new series exploring the genre. “We superficially label it, you know, pickup trucks and good ol’ boys and hound dogs and six packs of beer, when it is in fact dealing with the fundamental questions of the human project which is love and loss.”

I thought about that quote a lot when seeing seemingly every outlet stuck the country label on Dreamin’, the latest album by Philadelphia-based band Friendship on Orindal Records. The tag is debatable, for there are no pick-up trucks on this record, no drunken melodrama, but there is a sense of ageless contemplation that is very much of the genre. “Blessed is the front porch, and your six Pabst” begins ‘Dusky’, the album’s second track, ticking Burns’s six pack requirement yes but more importantly capturing something that illuminates the entire record—a kind of pensive contentment that exists at the centre of all the best country songs. “[Country] is a music in which you can hear the lyrics,” Burns continues. “It is about emotions and experiences and stories.” However you decide to describe Friendship, there’s no denying that’s what they do best.

The last we heard of Friendship was on 2017’s Shock Out Of Season, and although it’s unmistakably the work of the same band, Dreamin’ finds the quintet (Dan Wriggins, Peter Gill, Mike Cormier, Evangeline Krajewski and Jon Samuels) vibrating at different frequencies. “We went in with fewer instruments. We made some ‘warmer’ choices,” says Wriggins. “We recorded most of it to tape [and] I played an old Fender Duo Sonic on most of the songs, which has a darker tone than my regular Stratocaster.”

The result takes the at times painful frankness of Shock Out Of Season and sands down the edges. The programmed drums of previous work are (mostly) replaced by Cormier’s decidedly analogue playing, and Gill’s pedal steel winds around the negative spaces with its typically timeless melancholy.

One thing that hasn’t changed is the framing for most of the songs. “I’m starting to accept that most of the time, I’ve gotta sing to a ‘you’,” Wriggins admits. This “you” proves to be a shifting figure, representing different people depending on the context of the song. In true country fashion, Wriggins explains it could refer to any one of a rotating cast of characters, from “a romantic partner [or] family member,” to “a friend, everybody, God.”

Each track views a central you from a different angle, ruminating on times gone or peering blindly into the future. These snapshots knit together in a complex tapestry of all the little connections in our lives, from the seemingly insignificant to those figures who become the pillars that hold us up. Legendary cult singer-songwriter Kath Bloom is a big influence, and Dreamin’ possesses the same bruised but defiant outlook, existing in what Wriggins describes in a piece for Talkhouse as “a world of vulnerable love, living the pleasure and pain of intimacy.”

“I know it’s so foolish to dwell on the past,” he sings on ‘Millionfish’ (a track that stands out for Cormier’s subtle shuffling drums, maybe the most inexplicably affecting percussion of any song of last year), before admitting, “But as of late I’ve been dwelling, dwelling bad.” Opener ‘I Don’t Have To Imagine Your Love’ finds solace in this dwelling, a reminder of the consoling qualities of memory, while lead single ‘Clairvoyant’ (incidentally, a track inspired by a Willie Nelson concert Wriggins attended) feels more immediately sober and reflective. What’s ostensibly a sad song actually plays out as an ode of appreciation, Wriggins stating his gratitude to an understanding friend plainly and sincerely.

Wriggins has a poet’s fixation on the image, breathing deep human meaning into the most mundane of scenes. “Writing for me is often a process of zooming in and out very fast… images, scenes, and details come before themes,” he explains in an email. Be it delayed train journeys (‘Several Stations’) or watching a housefly drone around the room (‘Sure’), Dreamin’ focuses on small details and lets a higher meaning coalesce around them.

But Wriggins prickles a little when asked about this style of writing. “I’ve gotten the ‘quotidian’ descriptor a lot,” he says “I get it and I don’t. Like, what else could I write about? What do other people write about?” It’s a good point, and one that might explain the raw immediacy of Friendship’s songs. ‘You Might Already Know’ is perhaps the best example, the closest thing the album has to a love song finds it protagonists on either side of a text conversation (“You sent me a picture, you were looking alright”), focusing just as much on what is left unsaid, embracing what is destined to remain unknown with a paradoxical certainty.

Much of Dreamin’ finds Wriggins wrestling to make good with this uncertainty. “I know less and less every day,” he says, “[but] on the other hand, the whole point of a lot of pop music is to finally be completely sure about something for a few minutes.” To illustrate this point he explores the Springsteen’s ‘Brilliant Disguise’:

That song has two twists. In the first two thirds, it’s a pop song where he doesn’t trust his lover. For the first twist, he switches the pronouns in the third chorus. So now, okay, maybe he’s faking it too, and they’re both playing a shifty game. Then out of nowhere, he tacks on this bombshell verse: ‘Tonight our bed is cold/ I’m lost in the darkness of our love/ God have mercy on the man/ who doubts what he’s sure of.’ Being ‘lost in the darkness of our love’ isn’t necessarily a bad thing! It’s just unclear. Is their love a sure thing, and the suspicions are all just anxiety-brain? Or maybe the masks and disguises are there, but that’s just us, and we gotta get used to it.

There’s something in this final sentiment that defines Dreamin’, a kind of purity of intention even in the most complex or confusing situations. The ability to acknowledge complication and nuance, and all the while wholeheartedly embrace it. It’s something akin to faith. Faith in empathy, in the idea that others are out there, thinking and feeling and hurting just like you.  Faith in communication, in art, in the value of asking the fundamental questions of the human project not alone, but as part of a wider dialogue. As part of the conversation that is country music.

“In no other musical idiom had we ever come across this palpable sense of belonging to such a complex American family,” Burns writes in a book accompanying his series. Friendship might be country’s latest son, and one who has found their voice.

Dreamin’ is out now on Orindal Records and you can get it from Bandcamp.